Hair transplantation using the FUT (Strip Method) method is an older baldness recovery procedure that has been applied for decades.

The disadvantage of this technique is that it is a more intrusive process that can lead to significant post-operative edema and scarring of the scalp area.

Although nowadays there are more modern, painless methods of hair transplantation, such as FUE treatment and ARTAS robotic restoration, balancing restoration using FUT is still considered a suitable way of dealing with some patients.. 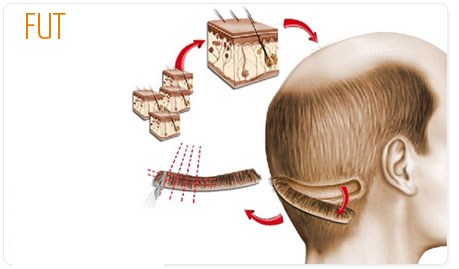 How is FUT treatment performed?

Initially the strip is drawn, from which the graft (donor area) will be taken. The width of the strip varies between 1-2 cm and extends from one ear flap to the other.

2) Local anesthesia in the area

Local anesthesia is then performed in the previously designed area.

3) Getting a lane of skin

By performing a cut, the skin strip is removed and detached with a scalpel or surgical scissors from the subcutaneous fat. It is a procedure that requires special attention to avoid deep cuts or even destruction of sensory nerves, which would lead to serious complications.

4) Suturing of the wound

5) Treatment of the grafts

The grafts are then processed by our specialists so that the appropriate grafts are obtained for the successful treatment.

Finally, holes are created using a lancet or needle in which the hair follicles are placed.

As with other treatments, with FUT, any interested person can rely on a transplant that meets the highest standards in Hair Clinic Athens. The treatment is performed in our clinic in Athens (28th October Avenue, 67 – Patision).

Dr. Fotis Tsounis and his team count decades of experience and comprehensive knowledge that guarantee impeccable results. You can contact us and ask for any advice before making your decision.
Our team is always at your disposal!

Note that any initial discussion is not binding. Our experts will be happy to explain the transplantation process through the Strip Method in detail and to suggest alternative ways, if you wish.

At Hairclinic Athens, a detailed diagnosis depending on each patient’s needs is an integral part of the procedure, so we can apply the most appropriate techniques and offer the best clinical and aesthetic result.